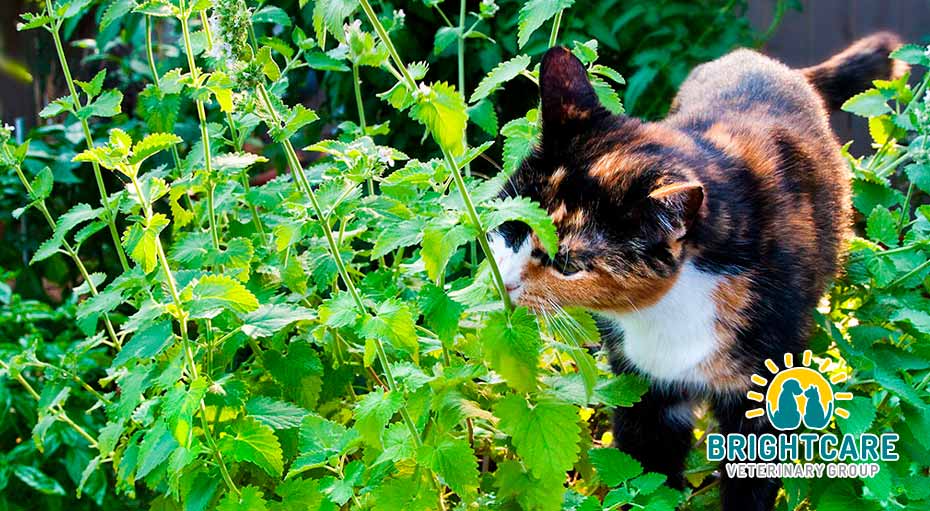 We all know that cats love catnip. Whether you’ve seen cat videos on the internet or have watched your own kitties go crazy for catnip (or both – we won’t judge you!), you probably know what we’re talking about. However, do you know how catnip works, or if it is healthy for your cats? As animal neurology specialists here in Orange County, we wanted to answer some of your frequently asked questions about catnip!

Catnip, technically known as Nepeta cataria, is a perennial herb that is actually a member of the mint family. The chemical compound in catnips that attracts and affects cats is called nepetalactone, and it is found in the leaves and stems of the plant. You can find catnip in its plant form, or infused in cat toys and cat treats.

How does catnip work?

So, how can a plant make your cat act so funny? Nepetalactone is a stimulant for felines, and when smelled or inhaled the chemical produces a “high.” Cats may react to by rolling around, flipping over, and generally being hyperactive and silly. The effects of naturally occuring nepetalactone last for about 10 minutes, at which point the cat will go back to behaving normally. Interestingly, all of this is only true when catnip is smelled. If ingested, catnip will most likely act as a sedative.

Nepetalactone can mimic feline pheromones and trigger the receptors affected by cats in heat. This is why cats are affected by catnip in a way that humans and other animals are not. Catnip may help humans relax, acting similarly to chamomile and other gentle herbs.

Is catnip safe for my cat?

The short answer is yes, catnip is safe for cats. This is especially true because they are typically just smelling it, which allows them to feel the effects. If your cat ingests too much catnip, it may upset their stomach and cause temporary nausea, vomiting, or diarrhea. If this happens, remove the catnip as soon as possible. These symptoms should pass quickly as the catnip leaves their system. If your cat appears to have a lower tolerance for ingesting catnip, try giving them a catnip infused toy instead of the plant itself next time you want to let them play with catnip. This will help limit their exposure.

Some studies have shown that if cats are exposed to catnip too frequently, it may start to affect them less and less. We suggest limiting catnip exposure to less than once a week in order to keep the fun going!

Why isn’t my cat reacting to catnip?

We hope we’ve been able to answer all of your questions. If you have any others, or if your pet is in need of neurological veterinary care in Mission Viejo, call us today!